moca: art in the streets recap (part one)…

…last week April 17th ‘art in the streets’ opened at moca and predictably, there was scarce room for seeing the works let alone taking photos. last saturday was more than successful and i have to admit, writing a single post about this exhibition with so much to cover has proven to be an impossibility. so i’m breaking the recap down into multiple posts so as to provide you with as much coverage as possible.

this is the first major museum gathering representing a cross section of global street art dating from it’s early inception in the 70’s to the unarguable force that it is today. categorizing and curating the exhibit would have been a formidable undertaking but was done by grouping the work into sections dedicated to history, regions, cultures and evolution. no medium is left unexplored from photography, paintings, sculptures, installations and digital media.

in the spirit of street art, the exhibit isn’t limited to the confines of the gallery but also appeared as it should, on the the facade itself and an additional touch was the live painting of a metro bus in front: 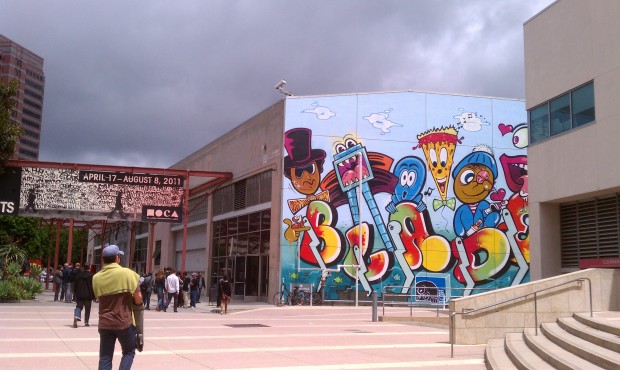 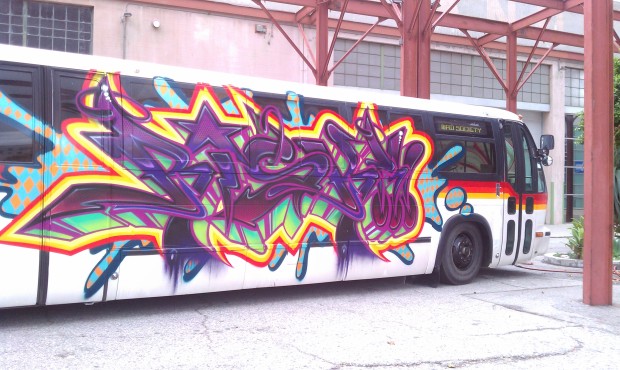 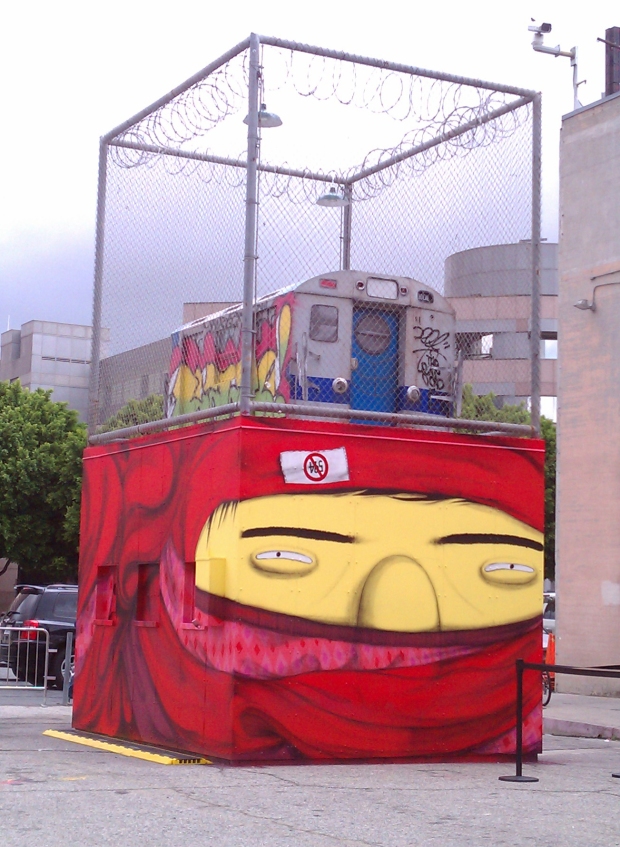 french artist, invader who has since been detained and released by the lapd, in a sly act of subversion, included himself in the exhibit with one of his iconic tiled aliens subtly placed over loading dock doors and another piece hidden in plain view within the exhibit not to mention hits at various other locations around downtown. i’ve linked the invaders map for all of you angelenos who would want to collect them all: 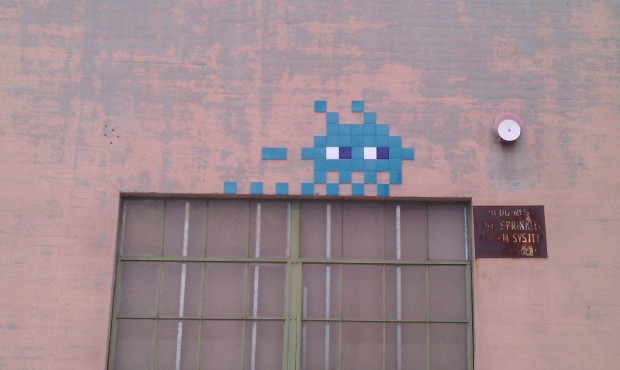 well, the outside gets the juices flowing but once inside, it was like a three ring circus for the senses! it was hard to know where to look and that was not for the lack of good curating but because of the sheer volume! the length in front of the doors was lined with an interactive piece on which were mounted hinged wood panels. flip the panels to view the skeletons beneath the flesh, kind of like macabre wooden picture blocks. it’s drawing for the sheer love of it and beautifully done: 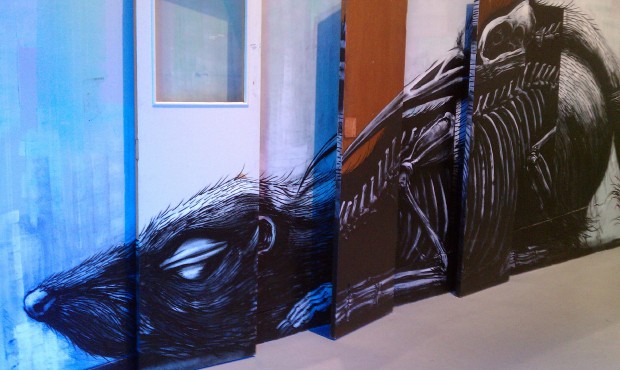 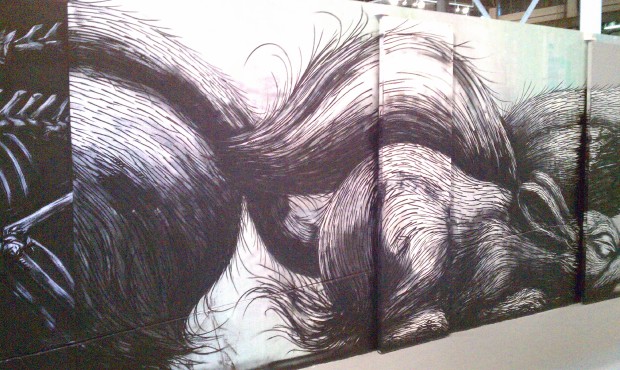 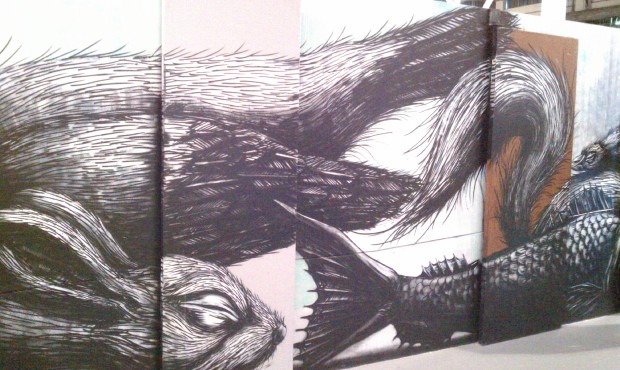 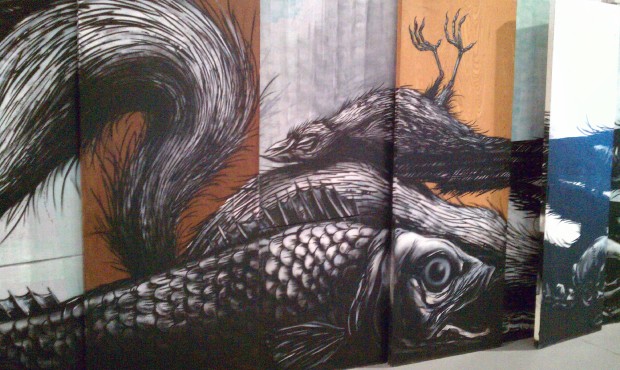 featured front and center was a car hand painted by keith haring. i can remember watching him paint his mural at the art center college of design in 1989. an inspiring figure in the world of street art and one of the first to make it into the museums, a revitalizing of haring’s work was long overdue: 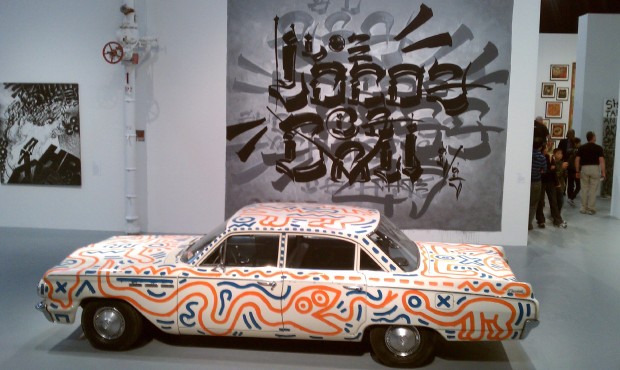 what was surprising was the level of intricacy and the thoughtfulness in which multiple mediums were employed. i deeply love how glitter was utilized in this piece: 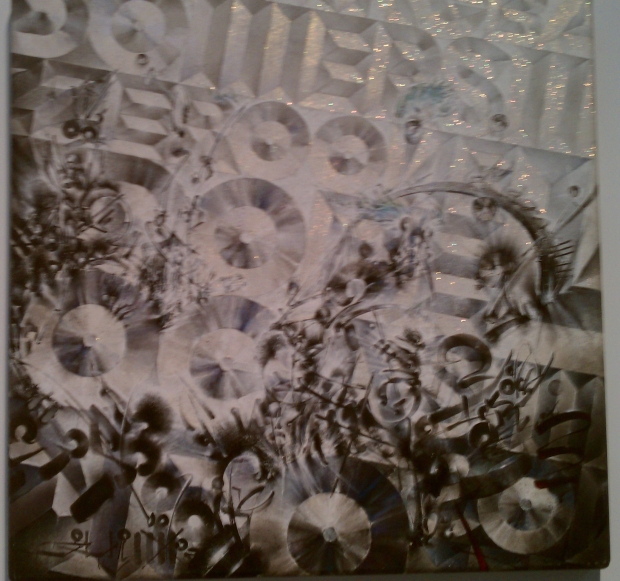 a great example of an intricate piece, the artist has definitely taken his influences from mandalas elevating this work to a place of spiritual meditation: 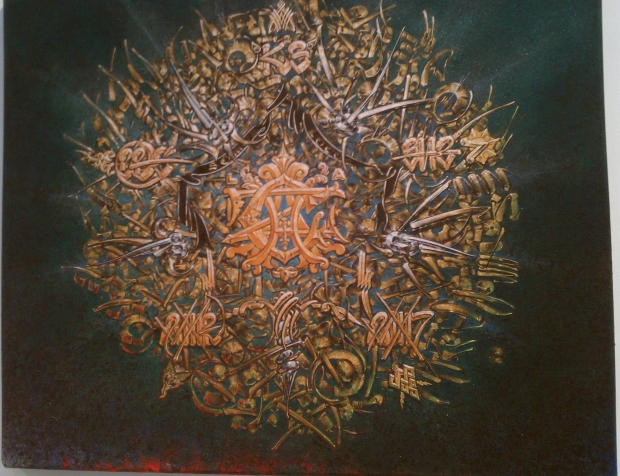 this installation has the feeling of alien hieroglyphs and the stark contrasting colors remind me of blue and white porcelain ware or jewish mezuzahs found in doorways: 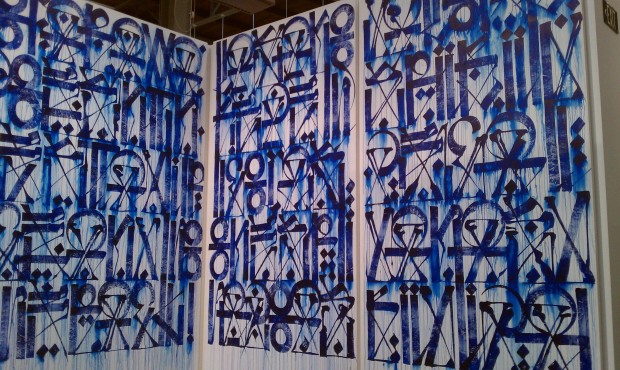 almost in defiance of the chromatic minimalism of the above piece, around the corner your eyes are treated to the blazing neon colors of these screen printed posters. 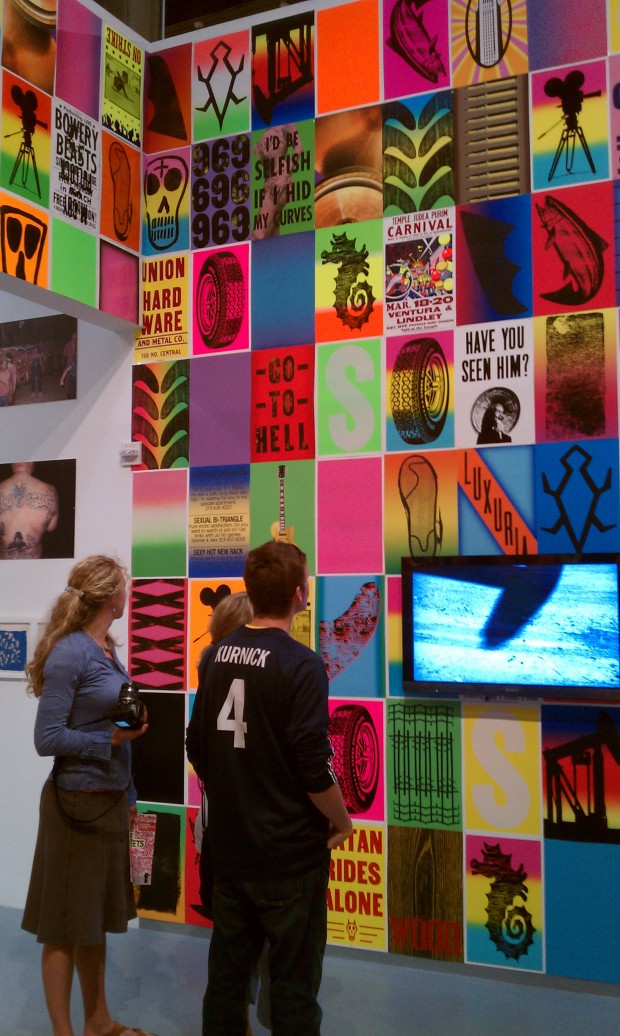 of course, you can’t have street art without shepard fairey as he can definitely be crowned as the most commercial of street artists. the effect of having everything neatly framed and behind glass was a little disappointing as this would have been a great opportunity for fairey to go large and maximize on the beautiful details of the work. taking it out of it’s usual context of commercialism would force the viewer to contend with the message: 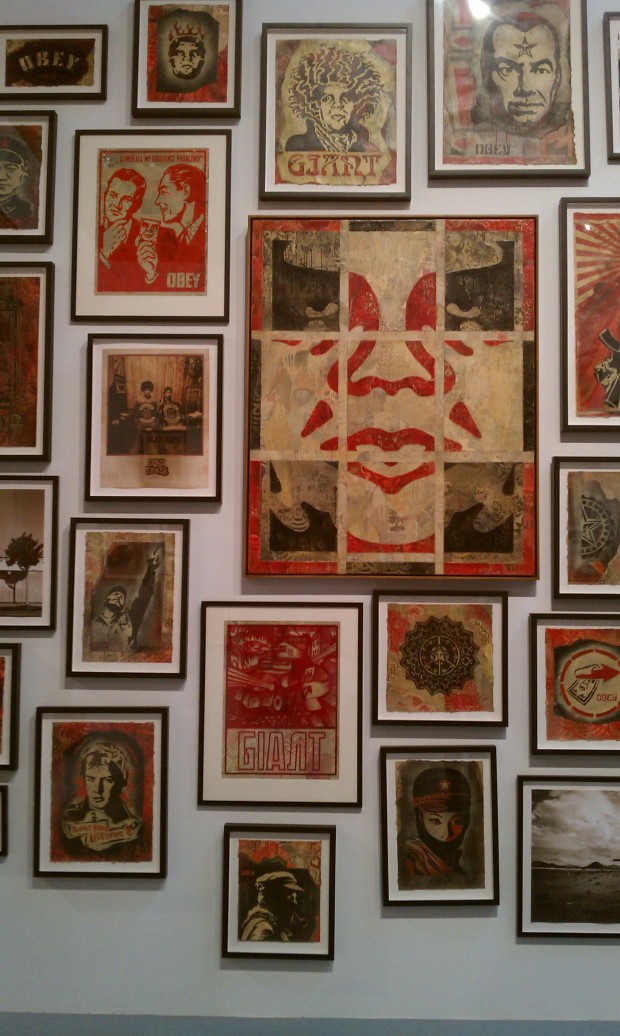 one of my favorite pieces is by european based mode 2. the sheer beauty and enormity of his urban figures exude so much energy and took me back through so many memories of my youth: the house parties, barbecues and hanging with my friends with a forty in hand. yes, me! i can see the influence of ernie barnes iconic painting, sugar shack. it made me sad to think that like those moments, this piece too would be temporary: 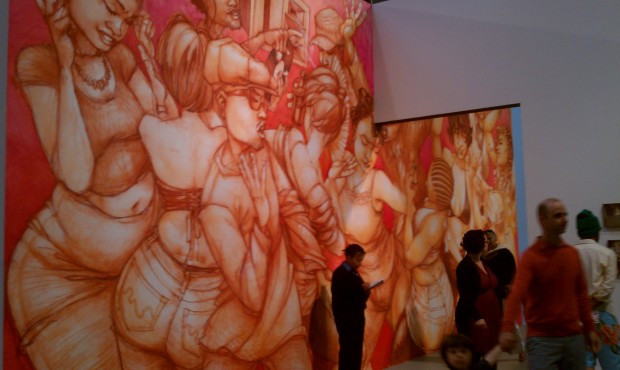 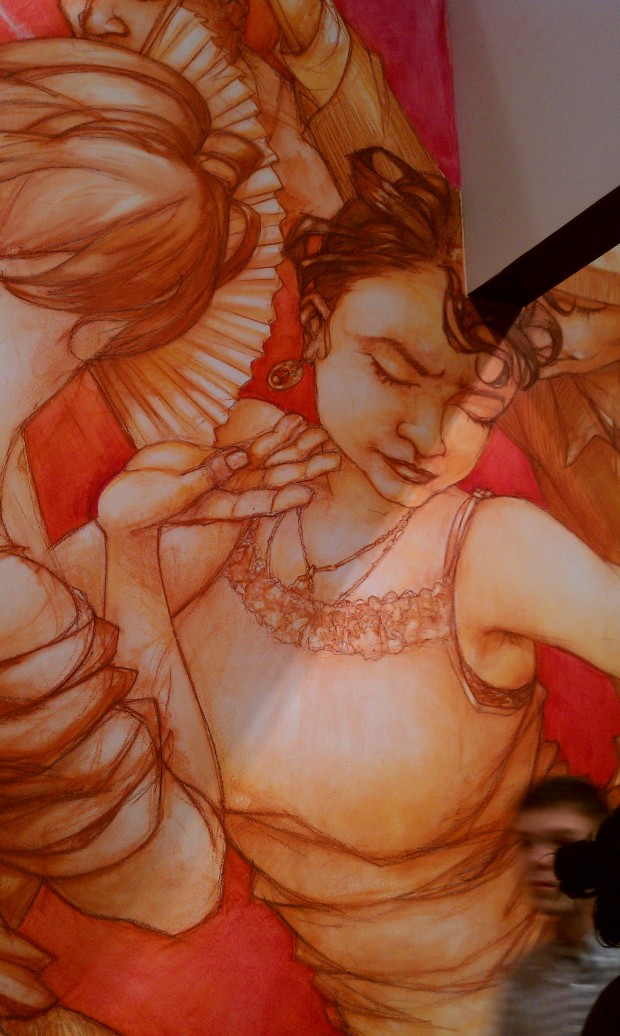 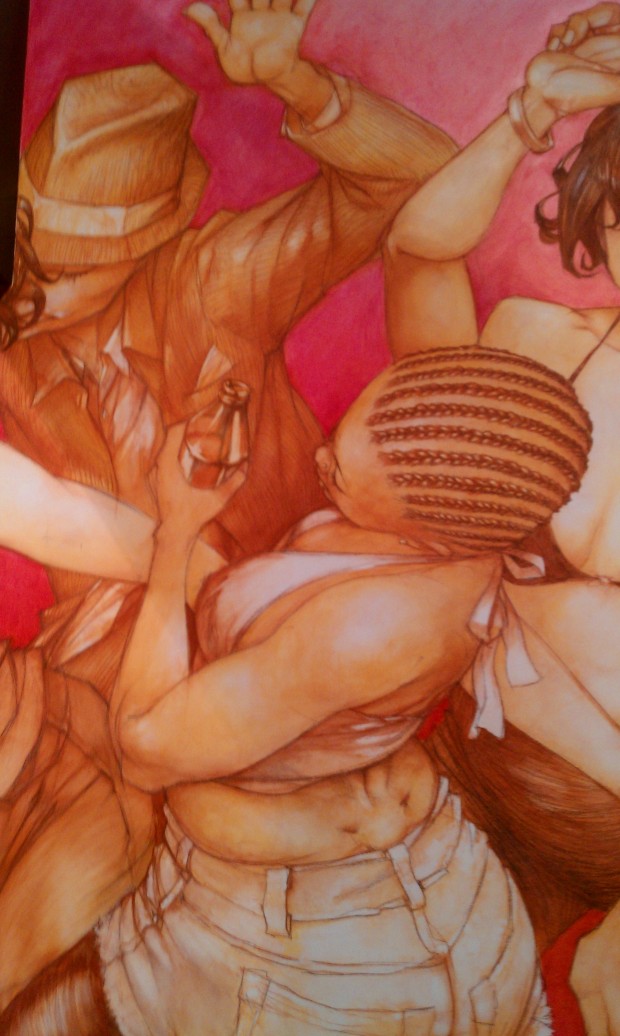 of course it should come as no surprise that there were quite a few political pieces since street art has it’s roots in revolt. 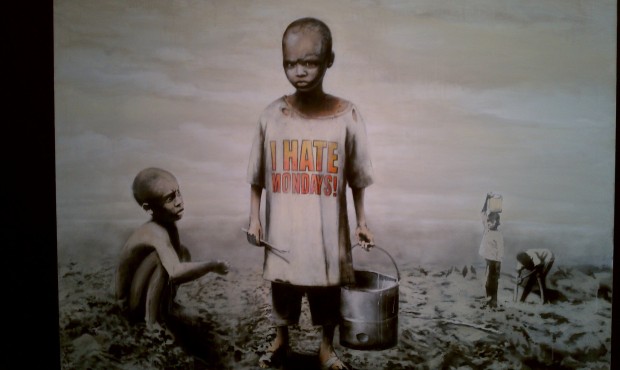 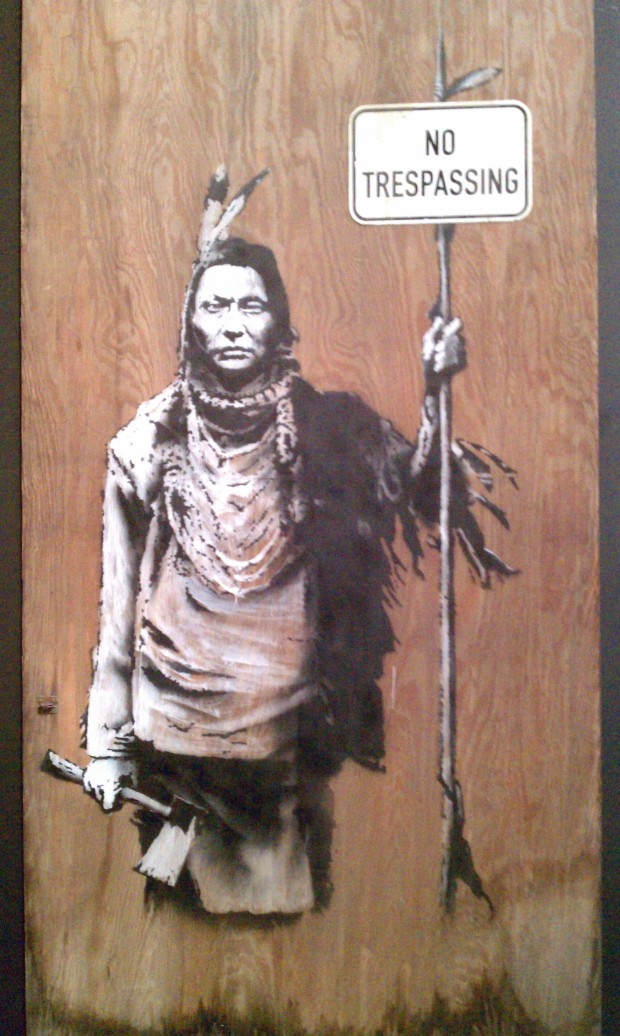 a cheeky play on surveillance technology aimed at stamping out street art. the complete decimation of the tree in the name of preserving public spaces and private property is chilling: 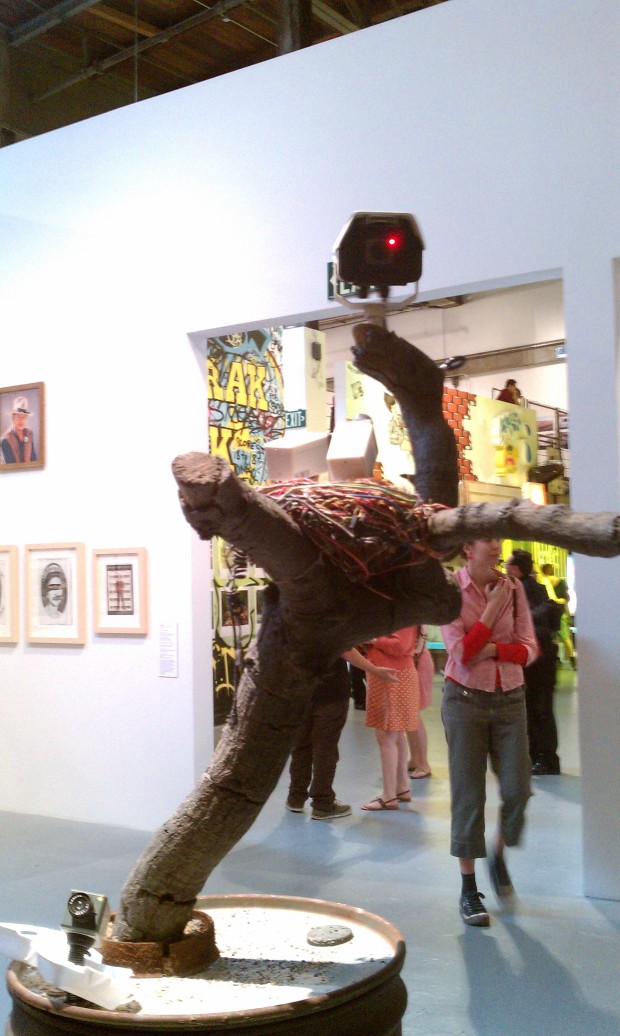 i think this is a good note to leave on as there is so much more to come. please check back tomorrow as i throw up another post recapping all there was to see at the moca exhibit. i’ve taken many other photos and details of the works including mode 2, and will post a link to my flickr gallery should anyone care to do a deep dive. peace!

5 thoughts on “moca: art in the streets recap (part one)…”