…provides mucho inspiration for designers on the hunt for vintage visuals. i won’t lie. we managed to get in by the skin of our teeth as the shop was closing up for the evening and just managed to snag a couple of finds. located beneath the pikes place market, it is so characteristic of the location’s historical vibe featuring a storefront peepshow of the world famous giant shoe museum! 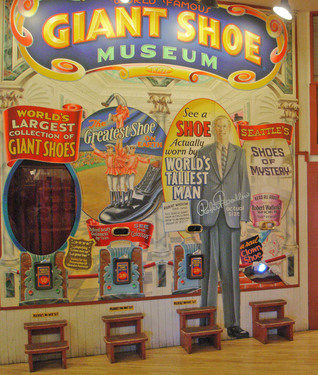 just a featured sample of the wonders that await:

what's not to love?

but the real take away are the two original silkscreen prints that my partner and i bought. being a long time fan of bill graham’s legendary fillmore concert posters, my partner was chuffed to find a silkscreen by the world renowned stanley mouse. after bill graham’s death in ’91, bill graham productions laid claim to many of the fillmore’s creative fruits thus making it difficult and quite expensive to obtain those concert posters. originally printed in 1967, the poster isn’t for one of the fillmore shows but for the first annual cosmic car show held as a benefit for the delano grape strikers: 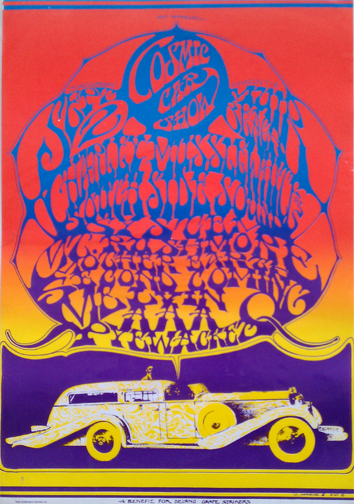 this is from the second printing done by frank westlake, printer of the family dog avalon ballroom posters in the 1970’s. the evidence of this is in the ‘san francisco poster co.’ mark on the lower left hand corner. further research hasn’t turned up much info on the cosmic car shows so i can only assume that the first was also the last.

our second contestant is an original silkscreen done for a roger clyne and the peacemakers show. now i don’t know a thing about roger clyne but i know i’m feeling the poster and that was good enough for me:

there’s something about the flatness, the color combination and cowboy boots that i found appealing and reminiscent of the groovy culinary posters that hung in my family’s kitchen in the 70’s. channeling the great david weidman…. recently produced by sandusky bay poster works, this work is numbered 51/69 and is autographed by the artist. having visited the site, it’s difficult to get more information on who’s who but it’s definitely worth the visit to peruse the other galleries.

if you’re heading to the northwest and want to stop into old seattle paperworks and say hello, i’ve posted the vital stats below. for those who can’t get to seattle, don’t fret. technologically savvy, john and amy hanawalt, the shop’s proprietors, have a facebook page on which they post tasty cuts for your pleasure! as evidenced in this post, the hunt doesn’t stop with the image but opens up a whole new world of informative twists and visual turns.