based on the grammy award winning green day album of the same name, i have to confess that i knew little of this rock opera until i received a phone call from the ahmanson theatre in an attempt to sell me on a theatre three pack.  i like to support my local cultural venues and the price was right so my partner and i were off to see the show last night.

tunny, johnny and will.

i was stunned by how absolutely touching this musical was and how unexpectedly close it hit home.  i realized that this was not only a reflection upon a generation, but it was my generation and told the stories of myself and so many other people i knew.  it’s a coming of age tale of three generation x slackers who decide to leave home and blaze their own trails.  will never even makes it out of town since his girl ends up knocked up early on so it’s up to johnny and tunny to hit the road without him.  the way is paved of course, with music, drugs, girls, war and self imposed poverty.

i was literally in flash back mode the entire time having been transported back to my formative 20s spent in long beach, ca.  my then boyfriend, roger, had just left the military along with his best friends, johnny lee and brandon.  it was a whirlwind of cheap apartments, cheap beer, candy flipping and home grown pot.  time not spent hanging out at each others homes or local bars, was dedicated to seeing live bands and attending pre-festival era a gathering of the tribes or lollapalooza shows.  the big difference that separated roger and i from the rest of the pack was that i had already finished college, roger was working on his degree as a filmmaker and together we were incredibly political.

i remember the burning volkswagen bug in the middle of the street that marked our first date.  hard to forget were the beginnings of the gulf war and our fear that roger would be called back since he was on active reserve.  walking up the stairs to johnny lee’s place, you could smell the crystal meth being cooked up in the apartment below and yes, i also remember the bust and johnny’s not being able to go home until the cops cleared out.  i worked with an arts collective throwing costume themed warehouse parties with an exhaustive line up of local bands and i remember watching fights break out at the sublime house fueled by testosterone, drugs and alcohol. 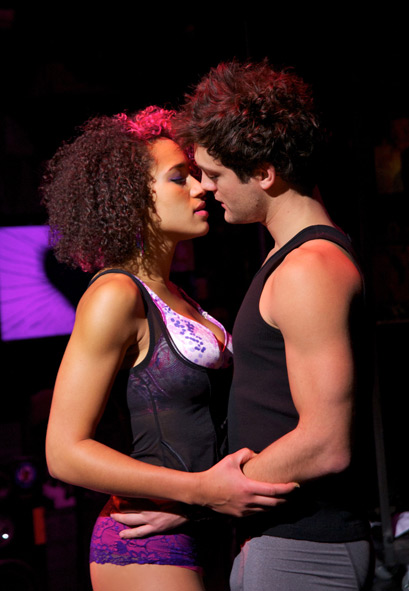 this rock opera had all of that and more with a cast that was unbelievably talented and very young.  the songs and choreography blazed with the energy of a disaffected youth with a “fuck you” attitude and perfectly exemplifies the hopelessness felt by a generation who were very much in touch with reality.  there are moments tempered with deep felt tenderness as these characters struggle to find their place in a world not of their making.

this show is only on for one more week at the ahmanson before it moves on to arizona and other west coast venues finally ending in san francisco’s orpheum theatre. check out the link for more information: www.americanidiotthemusical.com 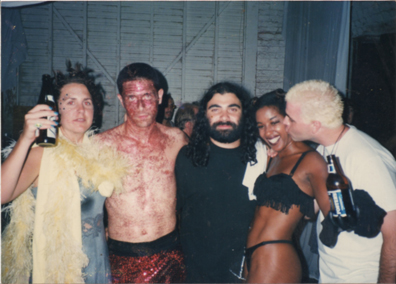 jen, glitter scott, matty, me and roger, the vegas on venus party ca. 97

← is it just me…
family bloodlines… →